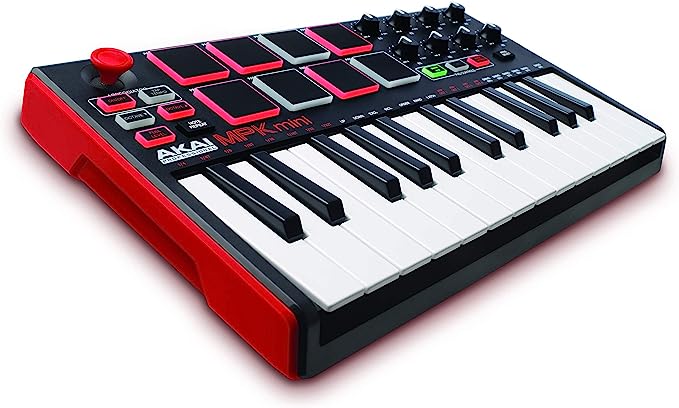 The Akai MPK Mini MK2 comes with a unique pitch/mod wheel that is similar to an analog stick. This feature functions much better than the Arturia MiniLabs touch bar pitch/mod wheels.

Unless you happen to be gifted enough to be able to play music by ear, there's no doubt about it: getting a MIDI keyboard controller is probably one of the best investments you'll ever make when building your home studio for making beats.

If you've read my guide on must-have equipment for music production, then this isn't anything new to you. It wasn't until I invested in a small MIDI keyboard that the beats I was making slowly started to improve — there's nothing quite like messing around with the keys and discovering melodies with your fingers as opposed to trying to click things in the piano roll with your mouse.

But if you look at all the options you have, it's easy to get overwhelmed when it comes to choosing the best MIDI keyboard controller for your needs. One of the current best sellers right now is the Akai MPK Mini MK2 — a compact, portable MIDI controller designed for bedroom producers today.

Is this MIDI keyboard the right one for you to invest in, or should you go with another model? That's exactly what this review will answer for you today.

Let's get on with it!

First things first: the Akai MPK Mini MK2 is a small MIDI keyboard controller. And I'm not just talking about the fact that it only has 25 keys — this keyboard is miniature. In terms of length, it's about the same size as a 13-inch Macbook Air, as you can see in this picture:

With this keyboard, everything has been scaled down to maximize portability — and that includes the keys, which is about the size of a penny. So if you're an experienced keyboardist, don't expect to play on this thing in the same way you'd be playing on a full-sized piano with weighted keys.

Triggering chords and playing melodies wouldn't be a problem (which most likely would be your main purpose if you're looking at mini keyboard such as this one), but if you have large hands and/or fingers, it would be easy to feel cramped when playing on this especially since the keys don't really have much weight behind them and can feel a bit springy.

That doesn't mean the keys on the Akai MPK Mini are bad, though. They're velocity-sensitive, meaning the velocity will change depending on how hard you hit the keys.

It's worth noting that this tends to be a problem for some people because you cannot adjust the velocity curves on the keys themselves. It's another reason why you'd only want to get this keyboard if you're using it to record basic melodies and chords for electronic music, not for playing full-blown compositions and such.

Let's move on to the pads. The pads on the MK2 is a huge improvement from the first model, which had a lot of issues with sensitivity and build quality. As you're probably already aware of, Akai is perhaps best known for making the MPC, arguably the king of all drum pads.

While the pads on the MPK Mini aren't quite on the same level as the MPC, they definitely feel great. They're made of thick, heavy-duty rubber and have a matte-like surface which makes triggering drum sounds feel awesome.

Next up are the rotary knobs. They stand at about less than a centimeter tall, which makes it much less likely to break or get damaged when you throw the keyboard in a backpack. These aren't knobs that turn endlessly, but they're robust enough for making tweaks to soft synths as long as you program it properly. As with the rest of the unit, they're quite small and are closely spaced to each other — thus, if something requires two knobs of simultaneous tweaking then you might want to consider assigning them to separate knobs that aren't placed next to each other.

Lastly, there's the 4-way joystick that's meant to replace the typical pitch and mod wheels. This is actually a genius move on Akai's part — the first generation MPK Mini had no pitch and mod wheels, so the inclusion of this joystick makes it possible without adding unnecessary space to the keyboard. It might take a while to get used to especially if you're used to wheel controls, but it works.

SONiVOX's Wobble is a pretty one-dimensional software — it's a synth to allow you to design wobble sounds. Great if you're producing dubstep tracks, but not much use elsewhere in my opinion. Here's a quick overview video to show you what it's about:

Hybrid 3 is a more useful plugin, as it comes with a whole bunch of presets that you can use to produce your beats with. It's very electronic by nature, but there are a few gems that you could use if you dig deep enough.

The program that we really care about for the purposes of this review is MPC Essentials. While the MPK Mini works right out of the box and is plug and play, setting up this software is necessary if you really want to get maximum use out of the keyboard (for example, triggering one instrument with the keys and another separate instrument with the pads).

But be warned — MPC Essentials is not exactly easy to figure out, especially if you're a complete beginner to MIDI. For starters, you need to sign up for an account at Akai's website and input an authorization code to make the software work — I'm not sure why, because the software is pretty damn useless for anyone who doesn't have the right hardware for it anyway. If you get this unit, I highly suggest you spend the time watching videos on Youtube on how to set it up so you can extract the most use out of it.

How Does The Akai MPK Mini Compare To Other Models?

Now comes the ultimate question: how does the Akai MPK Mini MK2 stack up against other MIDI keyboards? I'm going to compare it to a few other models that's within the same price range, and give my thoughts on how it differs from the MPK Mini. 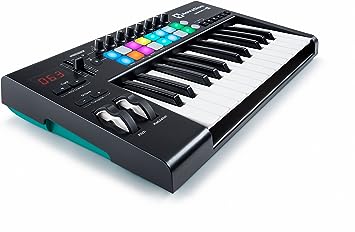 Out of all the other models, the Novation Launchkey Mini MK2 is the closest thing to the Akai MPK Mini. The main difference is that the Novation Launchkey Mini was designed to integrate very tightly with Ableton Live. So if thats the DAW you're using to compose your beats, then you might want to consider getting that model instead. They both sell for the same price, so that makes it a bit of a no-brainer.

Otherwise, the two keyboards are almost identical. Both are roughly the same size, both have 25 keys, and both have 8 knobs you can map out to your software. The main difference between the two units is that the Novation Launchkey Mini has 16 pads instead of 8. While 8 pads may be enough for 90{206c1b12f9fb10c564014517a442150f86534154877a5459064c1087562b6d43} of all users, if you want to have 16 with your compact keyboard for whatever reason then you'd be better served with the Launchkey. Of course, they sacrifice the size in order to make it all fit within the compact body, which might not be ideal for you if you plan on using this to play out your drums live.

One thing that's notably absent with this compact keyboard are the pitch bend and mod wheels — it just doesn't exist. Some people might find this to be unacceptable especially at the $99 price point, however, I personally don't ever use those, so this is a fine sacrifice for me to make.

The Alesis V25 comes with 4 rotary knobs and its keys are semi-weighted. It also does come with software that allows you to assign MIDI signals to whatever you choose

Retailing for just $89, the Alesis V25 is a full-sized 25-key MIDI controller. No mini-keys that cramp your fingers with this model — the keys are not only full-sized, but also semi-weighted so they don't feel as springy as other models would. Consider this model if a realistic playing style that resembles more like a real piano is important to you.

Like the Akai MPK Mini, it also comes with 8 drum pads. However, it only comes with 4 rotary knobs — so those who plan on using the knobs to adjust synth sounds during a live show, or generally just would need more than 4 knobs at a time, then you might want to look elsewhere.

The Alesis V25 is a lot larger than the Akai MPK Mini — almost twice the size in length at 21 inches. If you're looking for a budget MIDI keyboard under $100 and prefer to have full-sized keys at the expense of desk space and portability, then the Alesis V25 would be a great option for you.

The Oxygen 25 MKIV is the first in the Oxygen line of keyboards to feature drum pads. This unit also features transport controls and comes with 8 rotary knobs.

Next up is M-Audio's Oxygen 25 MK4 model. Currently in its 4th version of the series, the Oxygen 25 is another 25-note keyboard that features full-sized keys that people with larger fingers might find beneficial.

It comes with 8 drums pads and 8 rotary knobs, making the Oxygen 25 literally a bigger sized version of the MPK Mini. Unlike the other models however, the Oxygen line of keyboards feature transport buttons which would allow you to press play, stop, and record without the need to reach for your mouse — having transport buttons makes it easier to operate your DAW and compose music, which makes the Oxygen 25 a much more versatile keyboard than the others.

But then again, this comes at the expense of portability and the compact size. It's almost as long as the Alesis V25 but it's also a taller keyboard. It's also the heaviest unit out of all the ones featured on this page so far. Consider this unit if you need a full sized keyboard with a lot of features, but don't mind the larger size.

Ultimately, the right MIDI keyboard for you is completely dependent on what you need. If you value something compact while allowing you a wide degree of versatility in terms of controlling your DAW, then you can't go wrong with this model.

Check Latest Price
The Akai MPK Mini MK2 is a huge improvement over its predecessor. It won't completely replace a larger keyboard with full-sized keys or even a dedicated drum pad controller, but if you're looking for a compact, portable MIDI keyboard for composing music on the go and/or looking to save space on your desk it's hard to go wrong with this model.