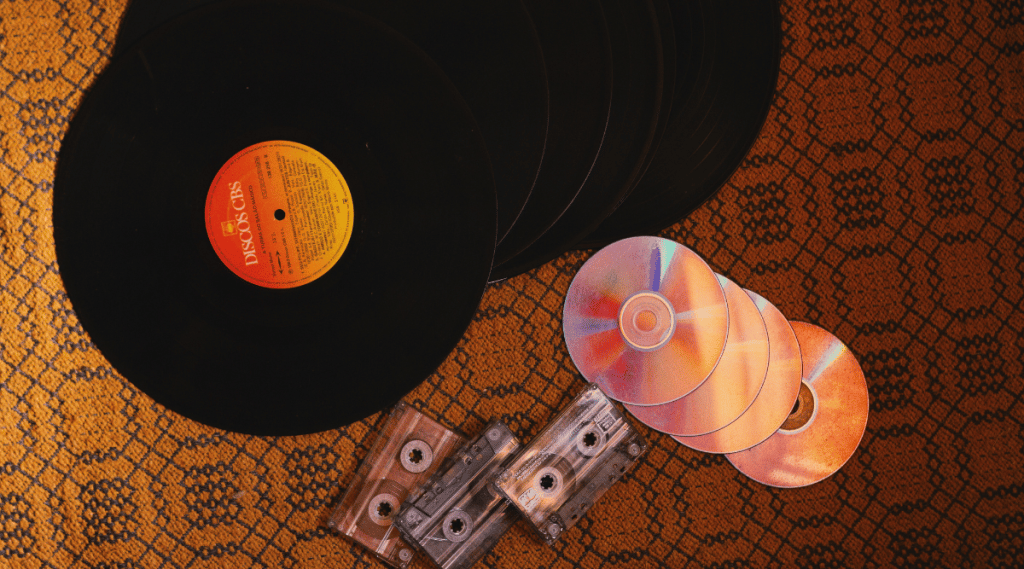 What is an LP in music?

There are many different terms for music releases, including LPs and EPs, as well as music in general – such as singles, tracks, and records.

But have you ever wondered what each of these means exactly?

Chances are you used the terms interchangeably in conversation. It is probably also the reason you are here.

By the end of this short and simple guide, you will never get confused between an LP, EP, album, single, mixtape, and demo ever again!

What Is An LP?

LP vinyl records originally stored up to 23 minutes of music per side.

Over the years, however, what an LP contains, as well as the medium on which LPs are released, has undergone various changes.

Is LP A CD Or Vinyl?

Originally, LPs were vinyl records, with the capacity to store a maximum of 52 minutes of music and up to 12 songs.

This runtime increased slightly, however, and then changed format with the release of cassette tapes in the 1980s, CDs in the 2000s, and currently the digital era.

CD stands for compact disc. And LPs have been released on CD, both as remastered editions and new releases.

So, an LP, as a collection of songs, can be both a CD or vinyl record. Despite this, LPs more commonly refer to vinyl records.

Is LP The Same As An Album?

When first released in the 1960s, albums were originally called “record albums”.

Albums had around the same amount of music as an LP – typically having at least 10 songs and a total runtime of 45 minutes or more.

Due to the runtime, albums are similar to LPs due to the amount of creativity an artist can put into and exhibit across the overall project.

Albums, like LPs, are also released less often. They cost more for music studios to produce, as well as market to a wide audience.

Are LPs The Same As Albums?

The answer simply depends on the person. Many say that an LP is the same as an album, while others say that LPs are longer than albums.

What Is An EP?

So, we know about LPs, but what is an EP? And what is the difference between an LP and EP?

EP stands for extended play. Despite this, they are not extended versions of LPs, but single releases.

EPs in music typically feature between 3 and 5 songs, with a total runtime of around 30 minutes.

EPs are most common with new artists, especially bands.

The short runtime gives the artist the opportunity to market a small number of songs that showcase their sound and style.

Sometimes, EPs are also released as prequels to albums.

They are also cheaper to produce and market, requiring less investment of time and money for music studios, especially with new artists.

What Is A Single?

If EPs are extended versions of singles, singles are releases that center around one standout song.

Singles, originally vinyl records, consisted of an A-side (the main release) and a B-side, which complemented the A-side, for a total of two songs.

More recently, B-side singles can be a remix of the A-side, or an extended version of the A-side, which might have been shortened for mainstream release and radio play.

The main purpose of single releases is to market and promote an artist, especially for an upcoming album.

In contemporary music, singles are also released to compete in top singles charts around the world.

What Is A Mixtape?

What about mixtapes – what are they?

Mixtapes are mostly associated with hip hop and rap genres.

Originally, mixtapes were self-made recordings of songs put onto cassette tapes, more than often unprofessionally recorded by new or smaller artists, to be handed out to the community.

Since cassette tapes are not widely used anymore, mixtapes retain their concept but are produced on CDs, or distributed digitally.

As mixtapes are typically self-produced, there is no limit to the number of songs on a mixtape.

Is A Demo The Same As A Mixtape?

Are demos the same as mixtapes?

Demo is short for demonstration.

Demos are projects that are used to showcase the first works of a new artist, typically new bands.

Demos can include any number of songs, but most have the same runtime, and music amount, as EPs.

Demos can be physical CDs handed out at gigs, or a selection of digital songs.

Demos are mostly self-produced, like mixtapes, or produced on a small budget.

Demos are similar to mixtapes in their purpose to promote a new artist but are more associated with rock bands as opposed to hip hop and rap artists.

What Is The Difference Between A Song, Track, And Record?

Last but not least, what exactly is the difference between song, track, and record?

These terms are often used interchangeably, but not incorrectly. Despite this, each term can be defined in a way that differentiates them.

A song refers to any musical recording. It is the most general of the above terms.

A track can refer to a single song on an album, LP, EP, demo, or mixtape.

An LP, in music, stands for long player.

LPs are music releases that are about the same as an album in length, having up to 12 songs with a runtime of around 50 minutes. Despite this, LPs mostly refer to long player vinyl records.

LPs are longer than EPs, which can have up to 5 songs and a runtime of around 30 minutes.

LPs and albums are larger projects that better showcase the creativity of an artist, while EPs are typically released by new artists for promotional purposes.