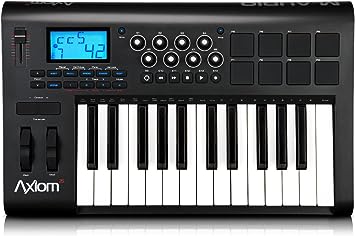 What I love the most is the Instrument mode, a new feature with the second generation Axiom series.

A couple of months ago, I flew to Vancouver, Canada to handle some personal business.

Thinking it was going to be a quick trip that would only take a month or two, I didn’t bother bringing any of my music equipment. I could use a quick vacation from making music anyway, plus I didn’t want to clutter up the house I was staying at any more than I already would be.

(But honestly, I think I really was just being too cheap to pay an additional $35 to check in more baggage, haha.)

However, because of some unanticipated issues, it turns out that I had to stay for much longer than I originally thought I was going to.

This wouldn’t be a problem… Except for the fact that here I was stranded without my studio equipment.

I had no means whatsoever to make my beats! Not unless I was willing to draw little MIDI notes with my mouse (hell no I wasn't), and I had melodies in my head that really wanted to get out.

This was the moment I realized that it would be a smart decision to invest in a portable MIDI keyboard that I could take along with me on trips like this (I only have an Oxygen 49, which is another fantastic piece of equipment that I’ll be reviewing soon).

Now before I buy any piece of studio equipment, I always do extensive amounts of research to see if I’m getting the most bang for my buck. After days and days of intensive research, I’m happy to say that I made the perfect choice: the M-Audio Axiom 25 MIDI controller.

If you came to this site looking for an Axiom 25 review, let me tell you why you should go ahead and buy this keyboard if you’re still on the fence.

(You should note that I’m reviewing the 2nd generation of the Axiom 25, which have significantly more features than the first gen.)

When the package arrived in the mail, I couldn’t wait to open it up and play with my new toy.

The Axiom 25 was carefully packaged and wedged in between two pieces of cardboard (it’s pretty cool how the company’s being eco-friendly by not using styrofoam or polyethylene), which I imagine protects it pretty well while it’s being shipped.

Aside from the keyboard, there’s pretty much nothing else in the box except for a USB cable to connect the Axiom 25 to your computer and a CD-ROM with drivers, documentation and a copy of Ableton Live Lite.

If you bought this to connect to hardware sound modules through MIDI (the Axiom 25 is one of the very few compact controllers than have MIDI inputs and outputs), you’re out of luck. You’ll have to spring for an extra $5-10 to buy your own 9V adaptor at your local hardware store because there’s none supplied — a little stingy of them, but not exactly a dealbreaker for me.

There’s no doubt that the Axiom screams of a high-quality build from the moment you hold it in your hands. Although it’s pretty bulky, there’s no doubt about its sturdiness. The keyboard itself is surprisingly heavy, weighing in at around 6 or so pounds.

It’s also a lot bigger than it looks, spanning the length of approximately one and a half 13” Macbook Pros. But with a little bit of tidying up around my desk, it fit perfectly in my workspace.

Let’s talk about the keys. As you probably already know, they’re semi-weighted — that means that as you press on the keys, a little bit of force pushes back against your fingers. The keys are also regular sized keys, pretty much the same size that you would find in a piano that’s gathering dust in your grandmother’s living room.

This isn’t the case with most MIDI controllers — I’m pretty sure that the Axiom 25 is the only MIDI controller available in the market that has both regular sized AND semi-weighted keys at the same time.

In my opinion, this plus the semi-weighted keys make it feel more of a “real” instrument rather than a toy. I’ve tested other models such as the Akai LPK25, and while it does exactly the same function making music on it just doesn’t feel satisfying.

The pads on the top right corner of the keyboard is the next eye-grabbing feature of the Axiom 25. Having pads built in with the keyboard (even though there’s only 8 of them) was a real selling point for me. Since I often forget which octave I need to be on when using the keyboard, it’s much more condusive to composing drum patterns than having to use the keys.

I really liked the feel of the pads — it doesn’t quite have the same feel as MPC pads, but they’re sturdy, responsive and velocity-sensitive at the same time. They’re perfect for triggering samples and sequencing loops with Reason’s Dr. Octorex or whatever drum sampler you have.

You could adjust the response curves as well as the velocity for both the keys and the pads. I like having them on fixed velocities, but adjusting the response curves based on your playing style also gives your tracks a nice “live music” feel to it, so feel free to play with it depending on your needs.

How Well Does It Interact With Software?

All of the above is fine and dandy, but I think the real reason why people pay top-dollar for this controller is because of how well it’s supposed to interact with your digital audio workstation and your software plugins.

So I was real excited to try out DirectLink, which they supply you with templates if you use either Logic, Garageband, Pro Tools, Reason or Ableton. Other DAWs such as Presonus Studio One 2 and Reaper have built in the Axiom 25 within their software so you could take advantage of the transport features as well.

I only have Logic and Reason installed on my system, so I was only able to test out DirectLink for both of those DAWs. The transport controls work great; it’s awesome to be able to press play, stop and record without having to reach over for the mouse and it really does make a difference in your workflow.

What I love the most is the Instrument mode, a new feature with the second generation Axiom series. Instrument mode allows you to control VSTs and other instruments direct from the keyboard. Out of all the features in the Axiom, I probably love this one the most. When composing beats, I audition a lot of sounds before recording.

Being able to audition instruments (by pressing the up or down patch buttons) without having to reach for the mouse or my trackpad was a great time-saving feature that made creating music feel much better. It’s the closest thing I’ve experienced to composing beats using a keyboard sequencer that costs thousands of dollars.

There are tons more features with the Axiom, such as groups and keyboard zones. But to be honest, I have no idea how to use these just yet, and it’s something I really need to buckle down and learn in the near future.

Is The M-Audio Axiom 25 The Best MIDI Controller For You?

For me, the Axiom 25 clearly stands tall over other two-octave MIDI controllers in the market.

Why? Because the Axiom 25 is sort of a mixer, drum machine and keyboard all in one nice controller.

It’s perfect for those who are lacking in desk space but want as much hardware control as they can get. Imagine how much more space you’d take up (not to mention how much additional money you’d spend) if you bought all these items separately. The Axiom series is truly a great all-in-one solution.

It’s even better if you work in Logic, Pro Tools, Cubase or Reason, because the DirectLink features are built-in and you’re pretty much up and running as soon as you plug in the controller.

I already use Reason for some of my music, but the integration is so tight that I’m seriously considering making Logic my main DAW for producing beats. Less reaching over the mouse to click on things, more creating music — the added ease to my workflow of creating music is amazing.

But here’s the downside: don’t expect to be doing any “real” piano playing on this keyboard. With only 25 keys, you’ll find yourself switching between different octaves frequently.

Not a problem if you’re making electronic music (or hip-hop beats like me), but it’s unrealistic to think that you’ll be able to play and compose classical piano pieces seamlessly.

If you don’t have any other keyboard in your studio and you want to play and record traditional piano music, I highly suggest that you go with a model that has more keys. The additional flexibility is worth it at the end.

Not to worry; the Axiom series also has 49 and 61-key models, and the only difference from the Axiom 25 are the extra sliders (that, and the size of course).

1.) want a portable keyboard that you can take along with you on trips and vacations,
2.) want more hands-on control with your DAW software and VST plugins, and
3.) want nice pads for banging out drums built in with your keyboard,

Then I have no doubt that the M-Audio Axiom 25 is perfect for your needs.

Where Can I Find The Best Price?

When I was making a decision on which MIDI keyboard controller to buy, price was a huge factor.

Like I mentioned earlier in the review, I already had a keyboard at home so I didn’t want to spend too much and double up on equipment purchases.

I knew I wanted the Axiom 25 (I’ve wanted it for years, back when the model was first released a few years ago) but the retail price of $300 was a little bit too steep for me.

After all, I could get a low-budget MIDI controller for much, much less… But only if I was willing to sacrifice the many, many features of the Axiom that I knew I really wanted to have.

It was a good thing I did some research online instead of buying it from my local music shop or direct from M-Audio. As it turns out, Amazon carries the Axiom 25 and offers a huge discount from what it’s normally supposed to cost.

Check Latest Price
An excellent choice for your MIDI keyboard controller if you're after portability, features and an improved workflow when composing electronic music. However, you might be get limited due to only having 25 keys -- upgrade to a model with more keys such as the Axiom 49 or Axiom 61 if you need it for "real" piano playing.