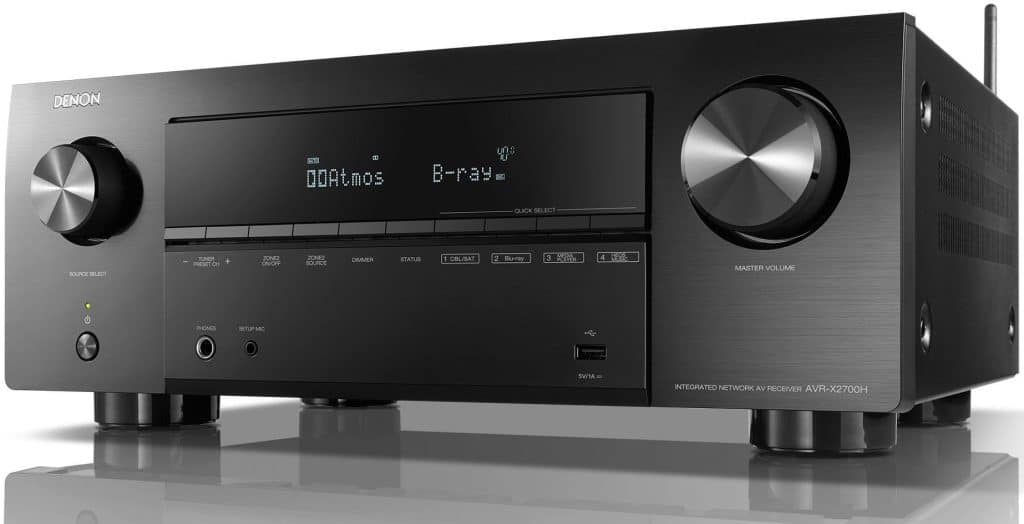 Finding AV receivers that can adapt to audio formats, deliver natural sound, and make the most of your surround speakers isn't easy.

Especially if you want an AV receiver that works with both movies and music. So, what can the Marantz SR7010 do?

An AV Receiver designed to deliver audio definition, an impressive frequency range, and the highest-quality sound, this Marantz AV receiver is a popular choice for home use.

Employing the Dolby surround system alongside Audyssey amplifier features, everything from sound effects to whispered dialogue should be delivered cleanly by the Marantz SR7010.

Are you looking for a new home theater system? If yes, then Marantz SR7010 is definitely worth considering.

The SR7010 is a 7.1 surround speaker system from Marantz, with a high-quality audio performance, sleek design, and affordable price. Read on for our full review.

All About The Marantz SR7010 Receiver

A quality AV receiver designed to create a dynamic range of audio from a wide surround soundstage, the Marantz SR7010 is an impressive piece of equipment.

Created with the future in mind, the Marantz SR7010 uses your speaker setup to provide consistently high results.

The Marantz SR7010 AV receiver is available from Marantz.com.

Our first impression of the Marantz SR7010 is that it is an attractive AV receiver. It has a black finish, lending a classy and elegant look to the curved design.

This receiver has a slim profile and can be placed on any flat surface. You can easily move it, although at over 30 pounds it does require a bit of heavy lifting.

We'd maybe have appreciated a slightly larger display window. For a quick glance across, it's decent, but it’s not a hugely useful indicator.

The comprehensive LED screen is hidden under a panel and nestled among the buttons. By hiding the screen away, the receiver has a sleeker finish, but we like a little more information at a glance.

If you were to break the Marantz SR7010 open, you'll find just as much care has been taken on the inside, with high-quality parts producing the clear sound Marantz is known for.

Lift the flap at the front of the Marantz SR7010, and you'll find a wealth of connections. There's an HDMI input, a USB port, composite video input, and stereo analog input, as well as the socket for the setup microphone.

Turn to the back, and you'll find all the rest of the Marantz SR7010 connections. Marantz have included enough to make sure that there are multiple connections that cover all bases, and several you'll probably never even know what to do with.

The most important of the connections are the 8 HDMI inputs, and the 3 HDMI outputs. The main HDMI output also supports Audio Return Channel (ARC).

For a pricey piece of equipment, this kind of service is definitely appreciated.

Sitting alongside the HDMI connections is an impressive amount of other sockets. There are 2 optical and 2 coaxial digital audio inputs, antennas for the built-in Wi-Fi and Bluetooth,

And for any audiophiles who are of the opinion that the best music comes from vinyl, the Marantz SR7010 comes with a signal ground terminal, for using a turntable.

In contrast with a sleek front, the back of the Marantz is fairly loaded up with connections and sockets. But Marantz hasn't just shoved any old connection in.

Everything is well organized and color-coded, so you can get to grips with the wealth of options available.

The Marantz SR7010 may not last you forever, but they've done a good job of ensuring it will keep up with audio advances for quite some time.

The features that Marantz has managed to fit into the SR7010 are as impressive as the number of connections. Hidden within this sleek and simple box is the opportunity to do almost anything you can think of.

To give a quick rundown, the Marantz SR7010 has in-built Wi-Fi and Ethernet, allowing you to stream your music from AirPlay, Spotify, DLNA, and any internet radio.

And that's really just a glance at what the Marantz SR7010 can do.

Lower resolution videos can be upscaled, and ISF calibration controls give you a chance to really deliver on visual quality.

To support all these features, Marantz have used only the highest quality of audio components. Nine channels are configured identically, receiving 200W for enhanced handling and quality of audio.

With the nine channel amplification and 11 channel processing power, the Marantz SR7010 can be used to create either a 5.1.4, or a 7.1.4 system.

Audyssey MultEQ XT32 and Audyssey DSX have been employed for room equalization, and consistent sound across high speakers,

while the Audyssey LFC removes those pesky low frequencies. For apartment living, this is a real help.

Setting Up The Marantz SR7010

Looking at the back of the Marantz SR7010, and reading the giant list of features, can make you feel that this AV receiver is going to be almost impossible to use without a degree in engineering.

However, we found the setup to be quick and (relatively) simple.

The SR7010 includes the handy Marantz set-up assistant, who can walk you through the process and the smart menu, and take care of the details. The on-screen menus are simple, and the manual is comprehensive.

To ensure you're getting the very best from your Marantz SR7010, connect the supplied microphone.

Audyssey MultEQ XT32 will then run an auto-room correction to ensure each of the connected speakers is configured for the right environment.

Even once you have your machine set up, the beauty of the Marantz SR7010 is that it's consistently monitoring the room to enhance the audio quality.

This is where the range of Audyssey systems takes over, taking note of the full range of sound and speaker layout to ensure you're getting the highest-quality sound for your space.

The Marantz SR7010 also includes a remote control. It's not exactly game-changing, but it definitely gets the job done.

The layout is classic and simple, with a useful backlight that we particularly appreciated when watching movies.

For a more up-to-date take on the remote, Marantz also connects to an app. Like the remote, it's simply designed, if not exactly innovative.

We found ourselves reaching for the remote more than the app, but the app did come in handy at times.

Sound Quality Of The Marantz SR7010

Really, this is what it's all about. The Marantz can pack in as many features as it likes, but what matters most of all is the sound quality.

Luckily, the Marantz SR7010 doesn't disappoint. In fact, it delivers some of the best performance we've heard from any AV receiver.

We tested the Marantz SR7010 using our standard test track, which included a wide variety of music genres.

From classical to hip hop, rock to opera, we wanted to know exactly how the Marantz SR7010 would relay audio.

The results were refined and impressive across the sound field. There's a subtlety to the performance which was appreciated during sophisticated vocal performances, but the system could also handle the thump of bass with great understanding.

But where the Marantz SR7010 really shines is with movie watching. The soundstage is expansive, with a depth to the bass and a control to the dialogue.

The SR7010 directs the sound around the room, drawing you into the heart of the action and adding air to give the soundtrack some depth.

Jumps in volume were handled with care, for a sound experience you could really enjoy.

The biggest impression we took away from the sound was that of balance. It lacks the bite and punch of some systems, such as Yamaha, but it conducts everything with care and control.

Flying bullets and car chases may not sound like direct threats, but they hang in the balance alongside the softer moments, with the subwoofer taking care of the stereo sound.

Careful placement of sound helps to build an effect, immersing you in the viewing experience.

The Marantz SR 7010 offers so much potential, but the real value comes from its ability to deliver.

What we liked best was:

The ease of setup. The assistant directed us through the smart menu, and the Audyssey system ensured that the sound continually adjusted for our needs.

Sound was refined, with an impressive focus on the balance and sophistication. Movies in surround sound were immersive, with the Audyssey sound designer creating an adaptable experience.

Comprehensive features help to futureproof the Marantz SR7010, while giving it real versatility.

There was little not to like about the Marantz SR7010, which impressed us throughout our testing phase.

There was a lack of bite to the sound, which we found we missed during some action sequences and heavier tracks. The sophistication of the Marantz SR7010 was enjoyable, but at times we wanted more of that aggression.

The remote and app were fine, but a little basic. They definitely felt more like afterthoughts, rather than a focus of the design.

Futureproofing and performance is at the heart of the Marantz SR7010, and why we loved it. The sound quality is impeccable, and the adaptable system works for all kinds of listening experience.