In line with the way modern technology is developing, the speaker industry is finding more and more ways to get the most out of a small unit.

Gone are the days when you needed to spend $1000 on a full speaker system that awkwardly takes up most of your living room; you can now get studio level audio from desktop monitors and bookshelf speakers.

PreSonus, while not necessarily a recognizable audio brand from the common consumer, has started to make some noise in the speaker industry by creating some great budget models that can deliver on sound but don’t burn a hole in your pocket.

With the clandestine renaissance of electronic music production there are now more bedroom producers than ever.

These smaller desktop speakers attempt to satisfy these home DJs with studio quality audio that doesn’t add to their student loan bills or take up their whole dorm room.

So, let’s explore if these speakers achieve what they set out to do, and ultimately if they are worth your money. Read on to find out.

What Does The PreSonus Eris E3.5 Offer? 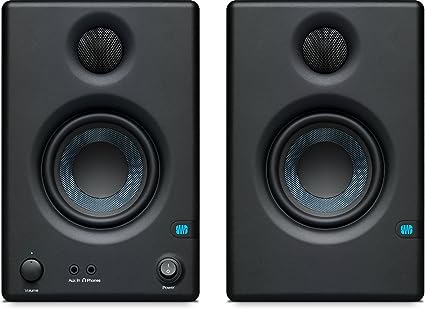 PreSonus Eris E3.5-3.5" Near Field Studio Monitor (Pair)
Check Latest Price
We earn a commission if you make a purchase, at no additional cost to you.

PreSonus already has some great products on the market, such as the E7XT which received great acclaim within the Eris series.

The Eris E3.5 are newer models that PreSonus market as ‘media monitors’ all this means is that they are designed for audio playback, such as music, and for listening to music production – essentially studio monitors.

It’s worth noting that PreSonus also has an Eris E4.5 which is basically the same; they are simply an inch larger than then E3.5. Interestingly, their model number refers to the size of the driver.

Both models are available as E3.5 BT, and E4.5 BT, respectively. These are exactly the same speakers, they are simply the same model and unit but with Bluetooth 5.0 connectivity added alongside the wired input, allowing both wired and Bluetooth connectivity.

This can help some users, while others will find that the wired connection is enough for their use.

Even though these models are cheaper than certain models PreSonus offer, what this does mean is that some of the more expensive physical features on the higher tier models still make it onto this ‘cheaper’ model.

For instance, we were impressed with the Kevlar material used in the driver. This is a great material for a driver that will endow your woofer with a little extra woof.

More so, the vinyl laminated fiberboard enclosure the unit is made from provides some great resonance and response to frequencies that would only really be expected in the higher tiered models, getting rid of pesky vibration and distortion problems you encounter with cheaper speakers.

The speakers have a standard wired connection but also offer a good variety of other connection options, useful for studio users. A TRS jack and an RCA line is really useful for external hardware.

In addition, the headphone out and mini aux jack is useful if you just want to throw music on with friends quickly.

Having such an accessible aux line and headphone line is actually really useful for mundane usage and is often something that other speakers on the market lack. If you buy the Bluetooth options then this is also at your disposal.

There is no XLR input, which shows that these speakers are created for home use, rather than for studio use. Moreover, it shows they aren’t fit for recording audio really.

Having front panel controls, next to the aux in jack, is pretty easy to hand and reduces unnecessary additional components.

A frequency response is also helpful for placement and bass response, allowing you to make the speakers fit your space rather than the other way around.

For how small and cheap these speakers are in compression to others on the market you may be surprised at how well they can perform.

Generally, the Eris E3.5 actually seems to outperform their tech specs, showing that a solid build design can do a lot more than special technologies.

As we mentioned, the E3.5 refers to the size of the woofer or driver. It’s worth noting that these are the smallest within the Eris series, so you do have to quell your expectations along with this specification.

This obviously means that you can expect quite a low reading for the low frequency ranges, which it is at around 80hz. Yet, you can’t really tell how low this low frequency response is, and the bass actually isn’t bad at all on these speakers.

Obviously, we would prefer a little more bass response for ‘studio quality’ audio playback, yet for near field listening on your desk, just hearing what you’re mixing, this can actually be more than enough.

Again, it depends on usage and preferences. If you are producing EDM on these speakers you may want a larger amount of sub and bigger drivers, which we would recommend.

If you are just recording guitar jams, or even a podcast, these can be fine. In terms of bass response, for general audio playback, whether that be recordings, gaming, movies, or just your own music, the bass on these speakers is enough which is impressive given the low bass frequency response.

While the subwoofer is pretty small, the tweeters are actually larger than the market standard for a unit of this size. This means that the higher frequencies of a voice or synth can actually be pretty crisp.

The tweeter is only 0.75 inches but is larger than enough for a speaker this size.

Both the highs and lows are pretty impressive on their own. While the low frequencies have bad specs they perform fairly well within the context the speaker will be used.

Conversely, the high end of the frequencies are really sharp, and the high frequency tweeter is actually bigger than most speakers this size.

While they both perform well, they can often be a tad out of balance as a result of them both being sort of out of size with each other. This isn’t a nail in the coffin, it just needs a little balancing out with the frequency dial which you can do to your own preference.

The PreSonus Eris E3.5 is pretty impressive considering its specs. Considering that this is one of the smaller units on the market, and the smallest in PreSonus’ Eris range, they have a pretty good response for such small units.

Moreover, one of the most defining features of the E3.5, that is likely what leads to such good sound quality for the price and size, is that PreSonus utilizes some of their more upscale features all the way down to these lower, cheaper models.

This means that the build design of these speakers are far beyond what others on the market can offer for a similar price.

The luxury of a kevlar driver and a vinyl laminated fibreboard casing is pretty uncommon for a speaker at this end of the market. You will definitely get value for money if you are looking for a smaller desktop speaker.

Generally, the audio performance is pretty good. As mentioned, the name of the speaker can give away most of its bass response capabilities, as the E3.5 has 3.5 inch subs.

You can expect this for most speakers that are this small, which naturally means that the bass will be less than speakers which have a larger driver.

Yet, the speaker has some pretty big tweeter for a unit this small. This does mean that the highs perform a lot better than you would expect for a speaker this small.

But, as the bass frequency response is so low, this means they remain a little out of balance with the subs on their default setting.

We recommend playing around with placement and playing with the useful high and low frequency dial they have on the speaker to achieve a sound balance that suits your environment.

All in all, we were really impressed with these speakers. The PreSonus E3.5 is built with some studio quality materials for no extra price, this enables the speakers to outperform themselves in terms of sound quality.

For example, even though the low frequency response is a meager 80 hertz, the speaker’s kevlar drivers help give that bass some serious mileage. The materials used to make the speaker mean that general distortion issues are also out of the picture.

If you want a speaker that is small enough to fit on your desk, but still has some quality audio playback for gaming, music, podcasts, video editing, then these are the speakers for you.

As a home DJ or producer there could potentially be speakers that have a better subwoofer, or just invest in an external subwoofer yourself. But for an audiophile who wants crisp and clear playback you can definitely achieve it with the PreSonus E3.5.