The Tascam Model 12 is a standalone mixer, but it can also be used with a DAW. With up to eight inputs for microphones, two headphone outputs, and a host of other features, this mixer is bound to appeal to a very wide user base.

The Tascam Model 12: An Overview 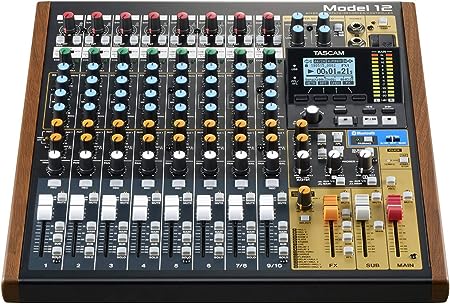 Tascam Model 12 All-in-One Digital Multitrack Recorder
Check Latest Price
We earn a commission if you make a purchase, at no additional cost to you.

The Tascam Model 12 is much more than just a mixer. Included is a combination of the traditional mixer, a USB interface (specifically 12in/10out), a DAW controller (with HUI/MCU protocol), as well as onboard FX and a multitrack recorder that supports 12 tracks (via SDHC, SD, or SDXC).

All this technology allows for a wide array of different features.

At its core the device is still an analogue mixer, but to access the range of other features, there’s an LCD screen with a detailed menu interface.

Some of these features won’t jump out at you right away, so be sure to have a good look through the menu interface so you know you’re making the most of your device.

Upgrades From The Tascam Model 24

The Tascam Model 12 is the evolution of the 2021 Tascam mixer, the Model 24. It was a solid piece of tech (and just like the 12, it offered a lot more than traditional mixers), but there was room for improvement.

The Model 12 more than delivers on these improvements, both in terms of the software and the hardware. It’s a very versatile successor to the Model 24.

As well as acting as a mixer (as the retro aesthetic would suggest), it's basically three different devices all in one. The features offered by the mixer include line, mic, and instrument inputs, EQ with aux sends, one-knob compressors, and 16 digital effects presets.

The next core function of the device is the multitrack recorder. This component features individual track arming, and the ability to record with SDHC/SD cards or SDXC cards.

Finally, there’s also a multitrack USB audio interface designed for use with computers running on Windows or with Macs (which can be connected to the device via a USB C port).

Regardless of the role, 16-bit and 24-bit are available, and there’s either 44.1 or 48 kHz PCM for recording, as well as for playback.

These specifications were the same when it came to the Model 24, but the notable upgrades come in the form of the USB MIDI interface, as well as the DAW controller options.

The sound quality of the Model 12 is also generally just superior to that of the Model 24, featuring Ultra-HDDA (High Definition Discrete Architecture) microphone preamps and EIN (Equivalent Input Noise) at -128 decibels.

Hardware Upgrades From The Model 24

When it comes to hardware upgrades from the Model 24, there’s a lot to discuss.

There’s the inclusion of the two new outputs for headphones- and speaking of outputs and inputs, they’re all located on the back of the device now, unlike with the 24 where they were located on the top.

This change in the input/output locations allows for a far neater desktop, reduces the strain on all of the cables, and will reduce the dust particles getting into the device’s sockets.

This means that the Model 12 is bound to require less frequent maintenance than the Model 24 did (and by maintenance we do just mean cleaning out the sockets).

The input channels can take line, mic, or instruments. These inputs are made possible via a combination of XLR and jacks. The XLR takes care of the input for the mic, while the jack is for the instrument and line sources.

You can select these with a simple button underneath the channel gain pot.

The first and second channels, much like on the Model 24, have a TRS unbalanced insert socket for send and return. This allows for the use of outboard EQ, as well as for the use of compressors, while you’re recording.

The seventh and eighth channels, as well as the ninth and tenth channels, work as both stereo line and instrument input.

That brings us up to eight different input channels, and because two of these can be used for either mono or stereo, you’re technically up to 10 outputs.

As well as these inputs, there’s a stereo Bluetooth option on offer as well, which you can route through the main mix or through the ninth/tenth channel. This means that you essentially have access to 12 different inputs.

There’s also a TRRS jack that allows for two-way smartphone connection. This will be handy for not only podcasters, but also musicians who want to audition different demos.

This feature allows for looping playback for as many as 10 sections of a song (or any kind of track, whether you’re recording music, a podcast, or neither). You can initiate the Vamp on playback either automatically or manually.

When you’re using automatic mode, the track will play normally until it reaches the initial Vamp loop. Then that section of your track will loop until you press F4 (or until you hit the footswitch).

At this point playback will continue until the track gets to the next Vamp section, at which point the section will loop, and so on and so forth.

When you’re using manual mode, however, you’ll be initiating the Vamp loops yourself, either before a loop or while it’s playing.

For full instructions on how best to use the Vamp feature, the manual will have you covered.

There’s no mention of suggested applications, but there are a number of uses for Vamp Playback, whether you’re looping a backing track while the band checks their microphone levels, or while you’re trying to learn a specific section of a track.

Benefits And Drawbacks Of The Tascam Model 12

When deciding on a new mixer, it’s important that you’re aware of not just all the features on offer, but also the benefits that the device will provide, as well as the drawbacks.

The following are all of the main advantages and disadvantages of the Tascam Model 12- and it’s worth noting that, although there are a couple of drawbacks, they don’t really affect the overall quality of the product.

Benefits Of The Model 12

Drawbacks Of The Model 12

While it’s true there’s still some improvements that could have been made, these are more than outweighed by the remarkable wealth of upgrades and additions compared to the Model 24.

Also, despite there being so many more features available, it’s not much more expensive than the Model 24 was. It’s actually surprisingly affordable, considering it’s essentially a three-in-one system.

There’s notable upgrades both in terms of the software and the hardware.

Even changes to the hardware that might seem small on paper, like the inputs and outputs being located on the back of the system rather than on the top (excluding the headphone outputs), will make for a far tidier setup.

It’s clear they took into consideration a lot of feedback from the customers who used the Model 24.