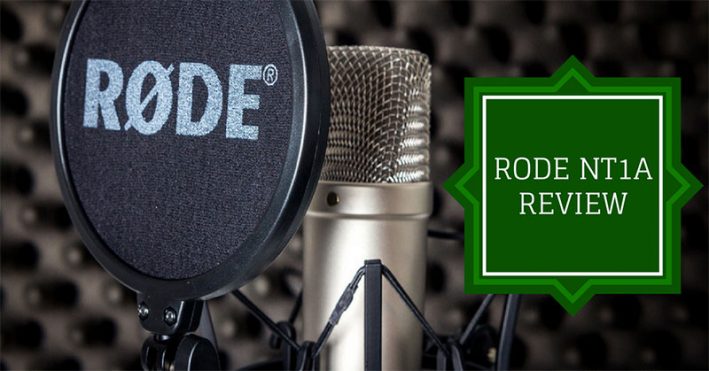 Learn More About The Rode NT1A

Recently, a singer-songwriter friend of mine came to me with a few questions about recording equipment and asked for suggestions on which gear to invest in.

Since she’s working on her debut album, she figured it would be wiser to spend her money building a home studio instead of renting one out. With the latter, she’s likely to end up rushing through the recording process and get crappy recordings (and crappy songs) as a result.

Now being a singer-songwriter, one of the most important and central pieces in her home studio was her microphone.

But as with most independent musicians out there, budget was an issue.

She needed a home studio microphone that would provide her the best bang for her buck, but had absolutely no idea where to begin looking for one.

To be specific, she needed a microphone that would meet the following requirements: With the following requirements in mind, I adviced her to stay away from condenser microphones in the $100 range, and for good reason.

Most of these budget mics tend to be extremely harsh with certain frequencies, and are either extremely dull and muddy or bright and brittle.

Recordings made with low budget condenser mics are also real tough to mix, which doesn’t leave you with many options during the mastering stage.

So we set out to find the best home recording microphone for her. I knew it wasn’t going to be an easy task, but we were determined to accomplish it!

After a couple of hours of rigorous testing between various microphones at our local Tom Lee Music branch (the Canadian version of Guitar Center), we both knew that we had a winner: the Rode NT1A, an excellent all-around large diagphragm condenser microphone for home recording.

Back in 2004, the Rode NT1A won Electronic Musician’s Editor’s Choice award. The fact that it’s still a best-seller in music stores across the world over a decade later speaks volumes about its quality.

But enough chit-chat, let’s get to the actual review.

Learn More About The Rode NT1A The first thing I noticed with the Rode NT1A is just how much they include in the package itself.

Nearly every condenser microphone has a shockmount included these days, so that’s not really anything special. But with the NT1A package, you also get a cover, a pop filter AND an XLR mic cable inside.

They all work excellently, and makes the whole bundle even more perfect for musicians who are just starting to build out their home studio. By having these bundled in with your condenser mic, you’ll save approximately $30 to $40 that you could use for something else.

Inside the box, you’ll also find a bonus DVD produced by Rode themselves on how to get the best recordings possible from your new mic.

The presenter of the DVD is Peter Freedman, the founder of Rode (as well as the company president). I didn’t finish watching it, but my singer-songwriter friend told me that the entire video gave her real great recording tips and inspired her even more to put the mic to use (I replied that she should be inspired all the time! Haha).

I’ve taken the time to hunt down the video online, and you can watch it for free below (it’s also a good video to gauge how the microphone sounds and get a feel of how it would sound on you):

How Does The Rode NT1A Sound?

Now let’s get to the REAL purpose of this review: what does the Rode NT1A sound like?

For my singer-songwriter friend, we wanted to find out was which condenser mic would sound best for both her singing AND her guitar playing.

Being on a strict budget, she didn’t have the luxury of buying two different mics for each purpose (which is what most pro studios do) so we wanted to see if there actually was a microphone that would do the job well for both tasks.

One thing I should mention is that many of the studio engineers that I know personally always chose the Rode NT1A as their first choice when it comes to recording acoustic guitars.

For many years, I’ve always wondered why… But after personally conducting a microphone test, it only took me one listen to understand.

One word: WOW. Her guitar never sounded better – the presence bump the NT1A gave at higher frequencies definitely made those strings shine when played back through the studio monitors.

And because the microphone is so quiet, we were able to pick up very subtle nuances of her guitar playing (such as her fingers on the guitar strings) which were articulated it in a way that I’ve never heard from other microphones. You’ll suddenly hear details that you didn’t even know were there.

As a result, the recorded guitar performance simply sounded amazing.

And thanks to a touch of EQ to emphasize the low end, the NT1A made a great performer sound even better in the studio! As for vocals, this mic certainly fit the bill for my singer-songwriter.

The mic is very clear, and adds a sparkle that allowed her voice to stand out right in front of the mix.

And just like with the guitars, the mic captured details in her voice that just wasn’t present in other models.

We both agreed that the Rode NT1A gave her vocals the most presence and clarity out of all the microphones we tested.

If you’re after a recording without much coloration, then this microphone is definitely for you. The Rode NT1A has a very natural response and stays true to the performance — in essence, what you hear is what you get.

For some people, this is a bad thing… But personally, I would rather get a neutral recording and make tweaks during the mixing and mastering stage depending on where I want to take the mix.

The sound from the NT1A is especially perfect for hiphop and rap vocals, because this microphone definitely makes your voice recordings easy to EQ — which in some cases can make the musician sound even better than they do in real life!

This mic is very quiet, which also can be a good thing or a bad thing for some people. If your recording room has good room ambience in terms of acoustics, then you’re right on the money.

For my singer-songwriter friend, we found that the sweet spot was recording at least 6 inches away from the mic. This allowed us to capture room reflections and added a real nice color to the recording.

Otherwise, you’ll might want to get closer to the microphone so you’ll get less room acoustics recorded.

I would even suggest setting up a vocal booth to maximize the sound that you’ll be getting from this bad boy. Even a simple homemade acoustic shield (for those who don’t have the space for a vocal booth) will improve the quality of recordings you get from the NT1A even more. Now the thing with microphones is that it could be a godsend to one singer while being absolute shit for another.

Meaning to say… it is tough to gauge the quality of the mic without knowing what the source is.

Let’s get this clear: no matter how cheap or expensive it may be, there is no microphone that everybody will love.

So despite all its positives, the Rode NT1A isn’t for everybody.

One thing I noticed about this large diaphragm condenser is that it’s bright. As a matter of fact, it’s probably one of the brightest microphones I’ve ever used. If the vocalist already has a high pitched voice, this microphone will make their vocals sound even sharper — not exactly the optimal sound for a song. I’ve also found that the NT1-A has a tendency make singers with a deep, bassy and baritone voice sound thin.

Basically, if your vocal tones fall within either end of the frequency chart (either extremely high and trebly, or extremely low and bassy), I’m not confident that this is the right mic for you. The good news is, it is perfect for those who don’t belong in either one of the vocal frequency extremes — which pretty much describes about 80% of the musicians out there!

I tested it on other singers and found that it works well for those with a “smooth” voice — not too raspy nor too sibilant, but just right.

If you’re buying this as a vocal microphone and you want your vocals to sound present and be upfront the mix, the Rode NT1-A is the microphone for you.

And if you’re looking for a condenser microphone to record acoustic guitars, then without a doubt this mic is DEFINITELY the perfect home recording microphone for you.

Where Can I Get The Best Price?

For every DIY musician, every last dollar saved counts.

After deciding that the Rode NT1-A was the perfect condenser mic for her home studio, we decided to shop around for the best price.

After hours of research, we came to the conclusion that you can get the best price for this condenser mic package on Amazon (click here).

Delivery was quicker than expected, and sometimes they offer discounts so you can get it below retail price.

But because of this, they often sell out quite fast so don’t take too long to think about it if they have any in stock.

Learn More About The Rode NT1A
Luckily for us, Amazon had them available, and we even qualified for 100% free shipping. Within a week, my singer-songwriter friend had her new microphone and was off recording songs for her album! Do you have the Rode NT1-A or have any questions about it? Let me know what you think in the comments below!